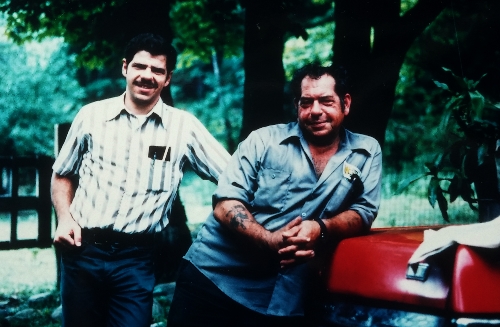 It was a beautiful fall day in Vermont, and the bow and arrow season for deer had just started the weekend before. It was a week day and there was no school that day.  I hadn’t had my drivers’ license for that long but I had quite a bit of experience driving back roads and standard shift vehicles. A neighbor was anxious to go deer hunting with me and we decided to ride around looking for a good place.  Due to the fact there was no school, my little brother was also home. I was 16 and he was 10, and I didn’t particularly want to have him ride along or go hunting with me at the time. I felt that I was older and shouldn’t have to babysit him when I wanted to go out in the woods, but he insisted on coming along.

Somehow I came up with the idea that if I scared him with my driving he’d want to stay home and leave us alone. I told my neighbor friend, David, that I was going to drive in a wild stunt to scare my little brother into wanting to be brought home. He grinned as if he thought it was a fun idea and was ready for it. We were a couple of miles from my house on the dirt road, and headed toward Cavendish and in third gear. The car was a 1964 Chevy station wagon, 3 speed standard on the column. I shifted up into second gear and floored the gas, then began swerving left and right, steering wildly. My brother had his chin on the back of the front seat as his eyes got wider and his facial expression looked scared. What I hadn’t planned on was that the car began swerving so far to the left and right that I lost control of the front wheels. My view through the windshield was blurry, with the leaves on the tree branches melding colors of autumn like a melted wax drawing. Being nervous about losing control, I hit the brakes in the middle of a slide to the right, and suddenly there was a loud bang and a jolt as the car came to a stop.

I was somewhere between amused and terrified as I opened the door to get out and see what had happened. The passenger side of the car was off the road and resting against a tree trunk. My little brother looked like he’d seen a ghost as we all stood there staring at the large dent in the right rear fender above the wheel well.

“Wow!” David shouted. “That was something! What a ride.”

I was laughing awkwardly and looking at the dent. Suddenly I thought about how my father would literally kill me when he saw it, and I looked at the road where I’d done all the swerving and sliding, and realized that the tracks told the whole story. Dad was not only a diligent fact checker but a stern disciplinarian. He was especially stern with me. I often thought I was the proving ground for how to discipline a son. He later became the well respected town constable.

I told my little brother we absolutely couldn’t tell Dad about where this wreck happened. I gave him two dollars and told him that the money was to make sure he never told about the incident as it happened. Then I broke off a couple of evergreen tree branches to use as heavy brooms, and began sweeping away the remnants of tracks from the dirt in the road. It was a lot of work to try to blend the road back to normal and a couple of the tracks were deeper so they were not really able to be buffed out. I did fill them with a few hands full of sand off the side of the road. David seemed OK with it and asked me what I was going to tell my father.

What a dilemma. Here was an accident that was unfixable before Dad came home and I couldn’t tell him where it had happened or he’d be wild and surely kick my butt all over the place. I decided we had to look for a place where there were trees much closer to the road and a place where my father would believe something more forgivable happened to make me accidentally dent the car.

As soon as the road was cleaned up, we were off. Driving miles up and down the area’s dirt roads, I was frantically looking for trees that were nearly in the road. We decided to go up a road ironically called “Wyman Falls Road” near Gassetts, Vermont.  We drove all the way to the end of it and turned around to come down the steep hill. Suddenly I saw what looked like the tree to be the victim of a much more innocent accident scene. It was a big tree with a bulge near the bottom that was so close to the road, it was almost in the road. There was a steep drop off behind the tree that went about 30 feet down an embankment. I came up with a story we could all agree on.

Here’s the condensed version of the story: We were coming down the hill about 25 miles an hour. My brother, Jeff was in the back seat and he yelled, “There’s a deer!” I looked to where he was pointing and by the time I looked back at the road we were headed off the edge. I hit the brakes and swerved, just hitting the tree.

In order to make everything match up and look authentic I got out of the car and measured the height of the dent on my leg compared side by side with the place on the tree it would have hit. I took a rock from the side of the road and began to scrape the bark of the tree at the same level as the dent. Things looked pretty much as if the car had done the damage. I even backed the car up and drove close to the tree fast enough to make skid marks. We all went home to wait for my father to get home from work. I reminded Jeff again about the deal we had. He was only 10, so two dollars was a lot of money for him in the late 60’s.

True to form, Dad came home tired and in a so-so mood. I remember him coming in and asking how the day went. I said things were mostly ok but I had put a dent in the right rear fender of the station wagon. He immediately looked alert and asked, “How the hell did you do that?”

I began to stutter and explained how it happened. It was so stressful and I nearly began to shake but knew I had to tell the story with confidence. After a leg weakening stutter, I said we had been riding around looking for a place to go bow hunting and we were coming down the hill by the old “Marsh place” on Wyman Falls Road.  “We were coming down the steep hill and Jeff yelled that there was a buck on the side hill to the left.  I looked to see it and by the time I looked back to the front I was headed off the road so I hit the brakes and the car slid into the tree.”

Just like I knew he would, Dad jumped up and got in the car, heading off to see where the accident had taken place and to study the scene. A little while later he came back home. I was shaking as he got out of the car and came up the porch steps. Wondering if he’d believe me or just start yelling and hitting me. He walked silently through the living room and sat at the kitchen table. I nervously followed him and stood off to the side of the table. He looked up at me sternly and said. “You’re God Damn lucky you didn’t go over that bank or you’d have probably gotten good and hurt. The next time you’ll know better than to look off the road without stopping the car first.”

“Whew!” I was out of trouble, and he’d believed the story.

A few months later, the car had rear axle and wheel bearing problems. Dad spent about three or four hundred dollars fixing it, then eventually traded the car to prevent spending more on rear end problems.

Almost 20 years after the incident happened, I came home to visit my folks and barely entered the house when my father looked up at me and said, “You think you’re smart don’t you? Well you owe me about four hundred dollars boy!”

Half curious and half dazed I asked why. He looked over at my brother, now about 30 years old, and said “Jeff told me about how you really wrecked that ‘64 Chevy station wagon. It wasn’t even on the Falls Road!”

I looked over at my brother who had a big grin that he was trying to stifle. He had given up the story to Dad for a few laughs. I immediately blurted out to him. “You owe me two bucks!” He knew what I meant.

Photo: Me and Dad, later on.