There are rare times people today have memories of actually meeting a person who was born in the last third of the 19th century. Those people are pretty much gone these days.  I do however, recall one such person in my lifetime.  When I was a youngster, Mr. Biggie lived next door to our family on the dirt road in the Cavendish Gulf. His front field stone steps were lined with smooth egg shaped stones his late wife had collected from various river beds. Mr. Biggie was the person who connected our family to the previous century. Knowing him was also a front row seat to the memories and stories of a man who was living in a time before most modern conveniences.

Mr. Biggie was basically a quiet neighbor. He rarely ever stopped by our house and when he did he usually just stood in the driveway to talk to my folks briefly. He didn’t have a phone so he wasn’t someone to bother people asking favors. I couldn’t tell you if he ever even used a phone. His relatives only stopped by once in a great while in the summer, and usually for just a short visit. I often went to his house to ask him if he needed anything, like shoveling his roof and steps.

I spent hours listening to Mr. Biggie talk about what it was like when he was young. At 14, he had a job working on a logging crew, and back then, they used horses for help with work and for transportation. In this case the horses skidded the logs out of the woods. One of his jobs was to actually stand on the cut logs and drive the horses as they pulled them along the rough ground. One day while working, END_OF_DOCUMENT_TOKEN_TO_BE_REPLACED

I don’t remember very many social events I attended as a kid, but I do remember one birthday party I went to when I was 6 or 7 years old. It was for a class mate one year older than I was. He was in second grade and I was in first, and lived at the upper end of the same country road I lived on. There were games to play and cake to eat. It was fun to see everyone competing in “pin the tail on the donkey”. I remember that game in particular because when his mother put the blind fold on me, she left a small opening on the bottom of the cloth that I could see out of. I didn’t want to be too close to the tail because it would seem like I cheated, so I pretended I was END_OF_DOCUMENT_TOKEN_TO_BE_REPLACED

I had a lot of things happen in the winter as a kid in the 1950’s and 60’s. It happens frequently that I hear people about my age refer to the deep snow falls we used to have back then. They are constantly comparing them to the snowfalls of now. I imagine most people forget or choose to ignore climate change as a valid factor. I was one of the unfortunate children of the 50’s that had a birthday in the middle of January. January 20th seemed often blessed by a snowstorm of substance, which was great for sliding and building snow forts, but not so great for having a birthday party. We lived on a single lane dirt road in Vermont.

END_OF_DOCUMENT_TOKEN_TO_BE_REPLACED

Everyone who lives in Vermont has memories of some small hill, or some big hill, they used to slide on during the winters of their youth. Sliding and skiing were about the only things that got me through the winters in the 50’s and 60’s. There were hills and of course there were logging roads on those hills to tackle. There were fields down the road, and the very minor incline on our lawn that qualified as a hill until I was a bit older. I remember the single-bulb outdoor light my mother would turn on at dusk. It was next to the kitchen door and lit up the stone steps down to the driveway. There was a dim, but bright enough glow END_OF_DOCUMENT_TOKEN_TO_BE_REPLACED

The wooded hills and valleys stitched with ties and steel

Brought me special moments still deep within I feel.

The calling of the whistle that promised something grand

I’d run for half a mile to get a view and take a stand.

Sometimes in country silence when darkness was so deep,

END_OF_DOCUMENT_TOKEN_TO_BE_REPLACED

For many people it’s hard to recall the first time they encountered the concept of death. I suppose usually it is the loss of a family pet. For me it was the shocking reality of the loss of a young bull we were raising for meat, but I had begun to think of as a pet. I was barely 3 years old. My folks had no money to speak of, and we were apparently poor, but being as young as I was, I wasn’t really aware of this fact. END_OF_DOCUMENT_TOKEN_TO_BE_REPLACED 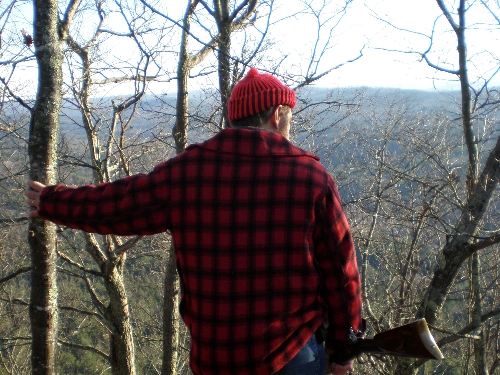 Autumn is the time of year for venison and for hunting in the forest for the illusive white tailed deer for many Vermonters. For my family, it was one of the most cherished times of the year. My father and his brothers were avid hunters. My uncles always looked to my father for guidance in where to go and where the deer were traveling on a regular basis. Many evenings were spent planning and figuring out where to go END_OF_DOCUMENT_TOKEN_TO_BE_REPLACED

When I was six years old, I was blessed with a new baby brother. My new brother’s name was Jeffrey. Back in those days no one under 12 years old was allowed to visit in the hospital. My sister and I waited in the car for Dad to come back each time he visited Mom. One time, he returned to the car and told us to look up. END_OF_DOCUMENT_TOKEN_TO_BE_REPLACED

Most of us, at one time or another, have been pests to our parents, asking if we could go with them every time they left the house. I was no exception to that, as just about every time my father went out the door, or even told my mother he was planning on it, I asked if I could go. It was more like, “Can I go too?” I also recall there were more than one of those occasions that I regretted having spoken the question.

One of such times was when I asked if I could go with my father and Uncle Dave to the top of Saltash Mountain, to listen to a radio broadcast of the Red Sox baseball game. The reception was better there. I have no idea who the Sox were playing, but I do remember END_OF_DOCUMENT_TOKEN_TO_BE_REPLACED

Sometimes it seems life presents a pattern of embarrassing situations. School was more than frequently a series of misunderstandings and misinterpretations. My teachers got a few laughs because I was so literal in my understandings of what was said, and I would often be in the wrong place at the wrong time.