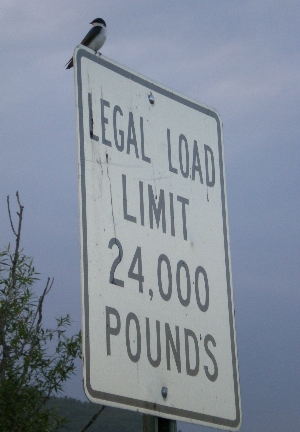 The summer got shorter, and so did my construction job, as I was enrolled at Castleton State College for the fall semester. Being on the construction crew still required me to be there at an early hour, usually 6 days a week as the deadline for finishing the bridge neared. This made for very tense times when it rained, or when the specialty skills guys couldn’t make it.

The rest of us were pushed onward and upward to get things ready for the “big guns” to inspect the work, such as the angle of the bridge approach, the amount of right of way, and the pouring of the structural concrete. Being nineteen years old,  I made sure my life was fun as well as productive. My mother was a big fan of me never being idol,  making sure I was up in time to get to work. A motivational alarm clock, if you will. Some days I’d make it to work early, and fall asleep in my car at the job site. If I did fall asleep, I’d be awakened by a fellow worker or the foreman rapping on the windshield, telling me to get up and get started.

I was on the crew picked to cut the trees for the right of way, and pile the debris to be burned. We had spent the week cutting and piling so the heavy equipment guys could make sure the entrance and exits onto the bridge were ready to set, and the temporary crossing was clear for everyday traffic. We had a giant pile of brush and chunks of wood ready to be burned. The workers with carpentry skills were on the bridge building the forms that would hopefully soon be full of concrete.

Another worker, a year or so younger than me, was on the job that day too. He was a pleasant kid, and told me he had a wife and a baby at home. I wondered how he’d gained all this responsibility at his age. We got along well and had become friendly during the time we had spent on the same tasks. He was supposed to help me control the burn and clean up the area. We had chainsaws and gasoline cans around in case we had to make further cuts for managing the project. There were storage tanks of fuel to fill the heavy equipment machinery. I remember standing next to the brush pile and telling my coworker friend to go and get 5 gallons of diesel fuel oil to start the pile on fire. He took off in a chipper mood with the empty can.

I was leaning on my shovel when he returned and said he’d soak the pile so we could get a good ignition and feed the fire. I stood and watched as he shook the last drop out of the can. In great anticipation I watched him squat down to strike the match. As soon as his hand swiped across the friction pad on the match book, the air lit up and a terrible concussion occurred. He had doused the brush pile with gasoline, not fuel oil as I had instructed. There was such an explosion, that pieces of debris went flying past my head, and such an instant massive heat surround me that I felt as if I was engulfed in fire. I instantly began to run toward the river. Just as I was about to jump off the bank into the water, I saw the carpenters waving and yelling to stop me. I wasn’t on fire. Unfortunately my new friend wasn’t as lucky. His arms were burning like 2 candles. I ran over to him and helped smother the flames. He was definitely one hurting unit. The foreman grabbed a tube of greasy first aid cream to put on his arms. I told him not to because it would insulate the burn, but he insisted and did it anyway. My co-worker was obviously shocked to be in this condition. The hospital was at least 15 miles away, in Springfield. We sped away in my ‘64 ford falcon convertible. With the top down, he held his bare arms up over his head to get the cool breeze on his skin. Amazingly, we arrived safely (with no police in tow) at the emergency room and thankfully, he was in good hands. The next day I went to visit him in the hospital and met his wife and baby. I was happy to see him smiling and with those he cared most about. He was obviously not coming back to work before the bridge would be finished. We were both lucky.

There were more incidents that created near misses and the foreman came up to me one day during the final stages of the job completion, and said, “Rick, I can guarantee I’ll get you work all winter and you won’t have to go on unemployment. I’d like you to stay on with me on my crew. Even going to college like you plan to, you couldn’t make any better money than you’ll get working for us.”

My response was, “What are you, Crazy? I wouldn’t give up school to stay on this job. I’ve been nearly killed a half dozen times here. I’m going to make it to school for the next semester unless someone does kill me first.”  I laughed.

He smiled back, “If you change your mind come see me.”

Some time after, I was offered a job with a starting pay of fifteen dollars an hour, which was big money back then, compared to the less than four dollar minimum wage. The job was repainting the underside beams of the Quechee Gorge Bridge, in Quechee, Vermont. For anyone unfamiliar, the bridge sits 160 plus feet above the river. After the deafening screams of my mother’s objections subsided, I decided it wouldn’t be a good idea.

3 thoughts on “Part 2…A Career Not Meant For Me”