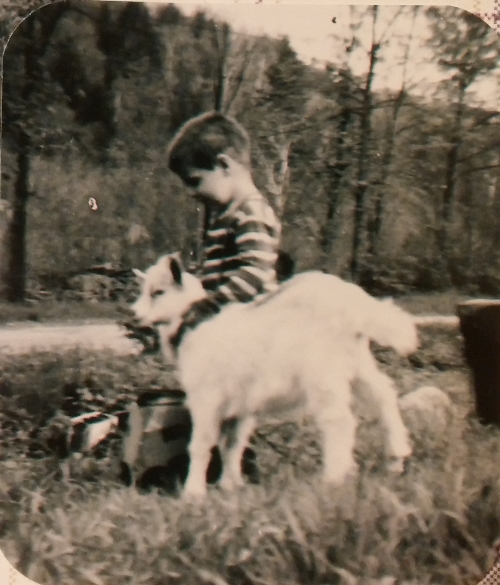 Over the course of my youth I had a variety of pets, some cats and dogs which were all very meaningful to me.  One pet in particular stands out as more memorable and unusual than the others. I had a Billy Goat. A rather large pet with an ornery disposition. Very often I would stand up petting the goat and before long, I’d be on the ground with a few bruises from this goat’s forehead.  A rope leash wasn’t the best way to try lead him around the lawn as my arm got longer and longer with each snap of the rope. It became more and more apparent the black and blues weren’t just playful love pats.

My mother was always busy with the chores around the house, she didn’t have much entertainment or leisure time. We had a television that was very difficult to see during the months that the trees were decorated with all their leaves.  We called the reception during those times, snowy.  Home radio reception was at best, scratchy.

One evening my father came home from work and told her about a chance for a change at home, a possibility for music.  He suggested to me that I let him take my goat to another family. That family really had a plan for that kind of pet. He and Dad had talked a deal over at work. My mother spent time convincing me I’d like to listen to music with her during the day.  She’d say things like “Wouldn’t you like to hear Elvis Presley.” I was a fairly agreeable child, and decided Elvis and whoever else sang on the 45 rpm records she had saved over time, would make us both happy.

One Saturday afternoon my father loaded my goat into the back of a pick-up truck and we went to visit a friend of his from work.  They gave me a pep talk on the way about our trading my goat for a record player.  I watched as our half of the swap was made. They put the goat in a garage turned barn and discussed how long it might be before it would be large enough to eat.  I remember feeling a bit uneasy about leaving my goat there with that family.  I later learned they had used a passive castration procedure in their attempt to make the goat gain weight. Fortunately I was a bit too young to grasp that concept, and just waited to go home sitting beside the record player.  I never heard any more about the outcome on their end of the bargain.

My mother was anxious to put on a few tunes of her preference, she’d sing along to gain my interest. Well, one thing for sure, the goat couldn’t sing, and for another, I probably wouldn’t get any bruises from the music. It was kind of nice to see Mom cheerfully enjoying those 45’s. It may have been the beginning of my life long interest in writing poetry and songs….

Stories to tell, stories of mine.

Each worthy incident, has it’s time

To illuminate my memory.

A string of clear lights,

Incidents that made me who I am now.

Within my heart and soul,

They do not depend on one another.

If one fails in time, they do not all go dark.